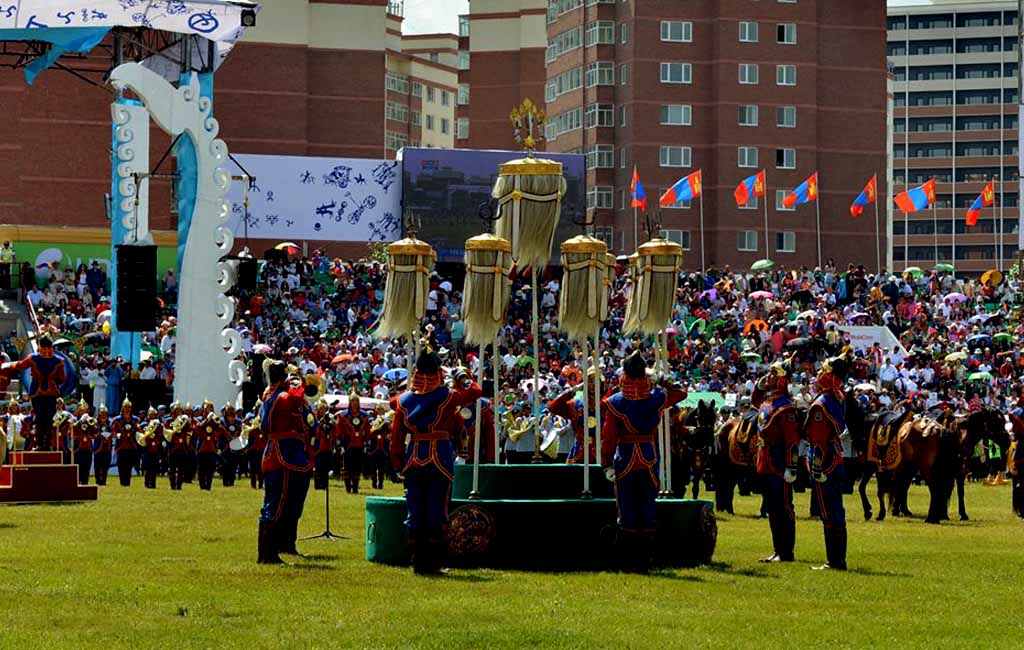 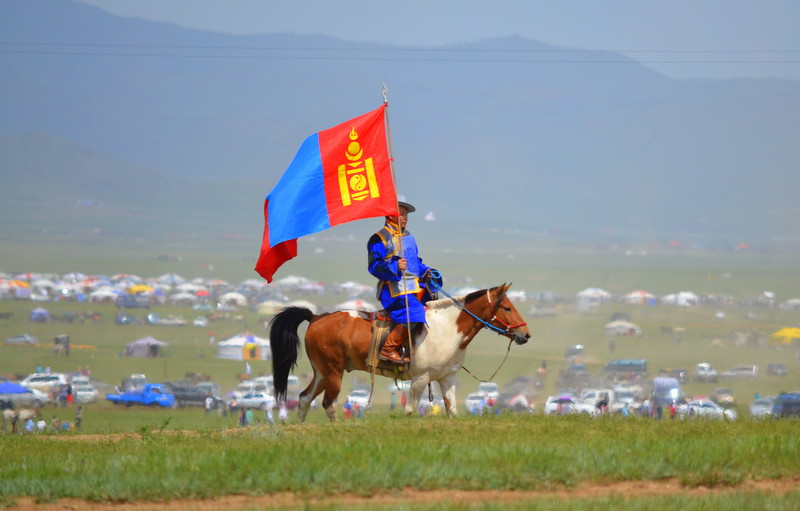 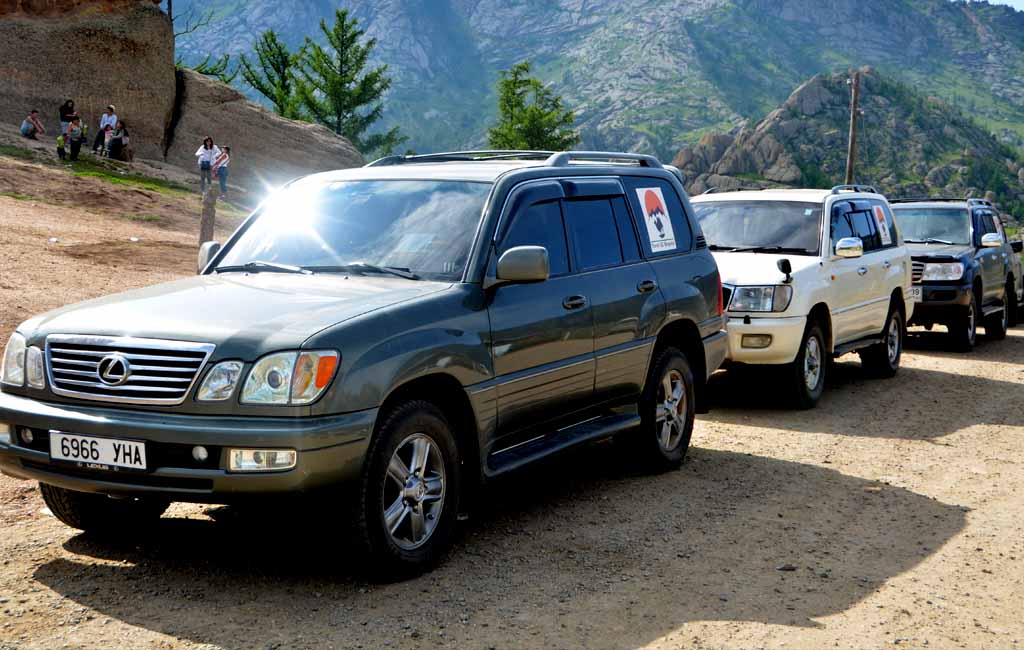 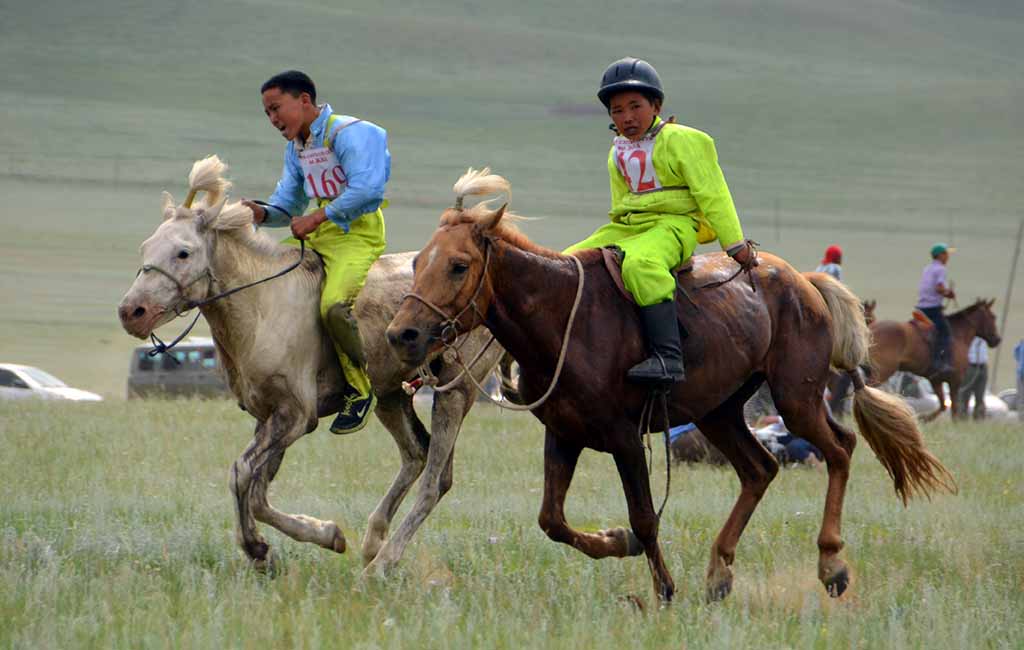 Region:
Southern & Central part of Mongolia
Duration:
16 days / 15 nights
Dates:
July 10-25, 2022
Note:
You can arrange your own trip date (with best rate possible) as you request
Number of travelers:
Min - 2

Price: $2795 for per person
Single supplement: $520
If you are traveling alone and wish to share accommodations, we will try to match you with a roommate.
We have a single man/woman willing to share a room with another single man/woman.

Upon arrival at Genghis Khan International Airport, you are met by our tour guide and transferred to the hotel in the city center. We set out to explore Ulaanbaatar-the capital city of Mongolia-the home to over a one third of the country's population where the traditional gers and Buddhist temples coexist with sky-kissing towers! Begin from the Gandan Monastery-Mongolia's most revered religious site-home to more than 100 Buddhist monks with beautiful chapels, courtyards and a giant 75-foot gold gilded Buddha statue.
Next, we stop in the Natural History Museum that showcases the spectacular fossils found in the Gobi desert. After lunch, we visit the National Museum of Mongolian History and culture that has rich collection of stone and Bronze Age artifacts, costumes, sacred relics and items related to the nomadic life such as hunting and fishing tools.
The balance of the day is open for you to stroll the streets of the city on your own.

During whole lovely day you enjoy watch Naadam festival or three manly sports such as wrestling, archery and horse racing. Visit opening ceremony of Naadam festival at the national stadium. And you will see archery, wrestling and horse racing during Naadam festival. Naadam festival is of the victory of the People’s Revolution. Naadam festival is celebrated every year at 11-13th July in Central stadium. Mongolia celebrates its independence and its rich cultural heritage with a festival of sports and revelry in Ulaanbaatar. The distinctly Mongolian feel and flair of the Naadam Festival make it a wonderful spectacle, a joyous time, and an intriguing cultural event. Colorful ceremonies and parading soldiers kick off the celebrations. The ancient game of wrestling follows, with men competing in many rounds of competition. Both men and women compete in the archery games, using the traditional Mongolian compound bow that terrorized Europe when Genghis Khan and his Golden Horde moved their empire west. The quintessentially Mongolian art of horse racing follows, where up to 800 horses compete, jockeyed by children so that the skill of the horse, and not the rider, is tested.

Drive to Middle Gobi is known as Baga Gazriin chuluu (earth stone). You will be reached in the early afternoon, lunch at the camp. There are some interesting granite rock formations, also there eye spa which supposed to be good for sights. There is ruin of ancient small temple, located middle of the rock.

This morning we drive through vast steppe to the Gobi, Mongolia’s southernmost province of semi-arid desert. Meet your local guide and driver and then transfer by 4WD vehicle to the Yol Valley in Gurvansaikhan National Park, situated in the lap of Altai Mountains. On the way to our lodge, we stop to visit the local Natural History Museum for an insight to the flora and fauna of the area.
The next three days will be well spent exploring the vast Gobi-the habitat of the Bactrian Camels, Argali mountain sheep, Golden Eagles, Jerboas that resembles the Kangaroo rats, Saker Falcons etc. We may also take a scenic hike through the valley to discover the habitat of indigenous vulture-like lammergeyers, Altai snow cocks, ibex, yaks, and Argali mountain sheep.

After breakfast, take in the stunning scenery of the Gobi-Altai Mountain range as you transfer to the towering sand dunes of Khongoryn Els, home to the ‘Singing Sands’. These spectacular dunes got their name from the noise made by the shifting sand in the wind. Feel the breeze in your hair as you ride a camel across the dunes before returning to the ger camp. Isolated from the rest of the country, the Singing Sands are the best kept secret for thousand years in the history of Mongolia.

Today we will have a full day exploring the sand dunes and rest after the long drive. The dunes seem to stretch on forever like a soft ribbon of sand draped over the desert. The shifting sand blown by the wind or someone makes sound so it is called Singing Sand Dunes. There is a beautiful green oasis known as Seruun bulag near the Khongor River. Return to the camp for lunch and enjoy feeling silence and a peaceful in the beautiful surroundings Gobi Deserts.

After breakfast, we leave Hongoryn Els for Bayanzag. It's a long day drive today and can take up to 5 hours but it's a scenic drive through the vast land. We will occasionally stop for photography and to watch the birds and the animals of the area. We check in our camp, wash and change and after lunch, we drive to visit the Flamming Cliff. The place was named as 'Flaming Cliffs' by Roy Chapman Andrews, an American explorer who searched throughout the Mongolian Gobi Desert and found dinosaur skeleton and eggs for the first time in Asia. The red cliff gleams with sunlight and can be seen from far away. We will take a short walk on the ridge of the cliff and look for the pieces of Dinosaur bones. We will drive little further to see the saxaul trees that contributed the name Bayanzag. Bayanzag means-rich in saxaul.

Today you'll drive to the ruins of the Ongi monastery. It was the largest Buddhist center in the Gobi region. There are 2 complexes of temple ruins which were built up in 1780s. During political repression in 1930s’ these two temples were destroyed and many lamas were executed and imprisoned. Visit Ruin of monastery reconstructed parts. On the way visit basin of the Ongi river which is dried out because of mining activity.

After breakfast at the tourist camp, drive to Karakorum, the symbolic ruins of the 13th century capital of the Mongol Empire. On the way, you may stop for an optional camel ride in the sand dunes of Mongol Els. Mounted on the double hump camel, you can wander about the sand dunes and visit the nomadic camps in the area.
In Karakorum, we will visit Erdene-Zuu, the oldest monastery, with 108 stupas, built in 1586. The monastery was built of the remains of the ancient Mongolian capital. Next, we will visit the Karakorum museum and see the Great Mongol state period, Stone Age, Bronze Age, Ancient state period halls.

Following breakfast at tourist camp, we will drive to Tsenher hot spring. Along the way we will stop for a break in the small town of Tsetserleg to visit a monastery museum. We spend overnight in a ger camp based at natural hot springs. Soak in hot water; enjoy a hike in the hills.

In the morning we will drive to Elsen Tasarkhai. In the afternoon, we will visit Erdene Khamba Monastery, also known as Khogno Tarnyn Khiid, is located only 18 km north of Elsen Tasarhai, at the Khogno Khan Uul Mountains (1967 m ASL.) Today there are only the ruins. Erdene Khamba Monastery had two sections: the lower one called the Zaluu Khiid, or the Novice Temple and the upper one called the Uvgun Khiid, or the Elders Temple, which was built on top of the mountain.
Erdene Khamba Monastery
The monastery was built in a sacred valley, according to Mongolian Buddhist traditions. Plus, the area is very similar to Manzshir Khiid and it belongs to the Khogno Khan Natural Reserve, a protected area. The Erdene Khamba Monastery was destroyed during Middle Age feuds between Western and Eastern Mongolians (Dzungaria and Khalkh Mongolia) after the collapse of the Mongol Empire. The armies of Dzungarian leader Galdan Boshigt noticed the golden roofs of the temples in Khogno Khan Mountain and massacred the partisan-monks of the rival Zanabazar in 1640, killing them by tying their necks with a rope (the Mongolian verb for the action is khognokh) as if they were goats and sheep. Later on, the Soviet troops, based in Mongolia during the 1970-80s, added a few bullets to the ruins during their outdoor trainings. The surrounding area is excellent for hiking and trekking.

After a leisurely breakfast, head out on the drive to Hustai National Park , the site of a unique re-introduction of Przewalski's Horse (Equus Przewalskii), called "takhi" by the locals. It became extinct in the wild in 1969 and since 1992, has been successfully re-introduced in Hustai from zoos around the world. This has been an international effort monitored by the Foundation for the Przewalskii Horse, based in the Netherlands and MACNE (Mongoian Association for Conservation of Nature and the Environment.) The park extends through the Khentii Mountains and includes the western edge of the Mongolian steppe. It contains large patches of birch and aspen forests and visible remains of Neolithic graves. Other wildlife found here include red deer, the wolf, and Mongolian gazelle.

July 24 ~ Drive back to Ulaanbaatar

On your drive back to Ulaan Baatar, visit the Bogdo Khaan Winter Palace Museum. The Bogdo Khaan Winter Palace is the home of the last Mongolian King, Javzun Damba Khutagt VII. The museum contains a number of Buddhist artworks and the private collection of Bogdo Khaan, composed of gifts from rulers and kings from all over the world. The artworks displayed here were made by the top Mongolian, Tibetan, and Chinese master- sculptors of the 18th and 19th centuries and represent the gods of Buddhist pantheon. If you did not have time on your earlier trip through Ulaan Baatar, visit the Museum of National History.

Transfer to the airport for flight to next destination.

Price: $2795 for per person
Single supplement: $520
If you are traveling alone and wish to share accommodations, we will try to match you with a roommate.
We have a single man/woman willing to share a room with another single man/woman. 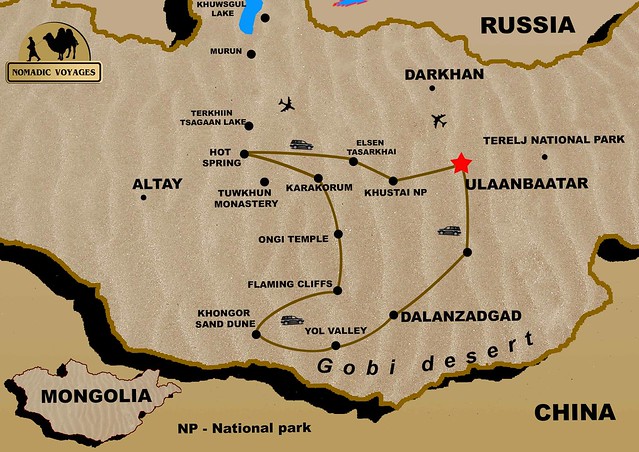 Our driver and vehicle were both outstanding. Our driver was so skilful that even difficult terrain was easy and a comfortable ride. Like our guide, the driver had a great personality and added a lot to our trip. The vehicle itself was very well maintained, always clean and very comfortable. My family and I thoroughly enjoyed our trip. I deeply appreciate the Nomadic Voyages Tour Company for accommodating our early arrived and delayed departure with transportation.