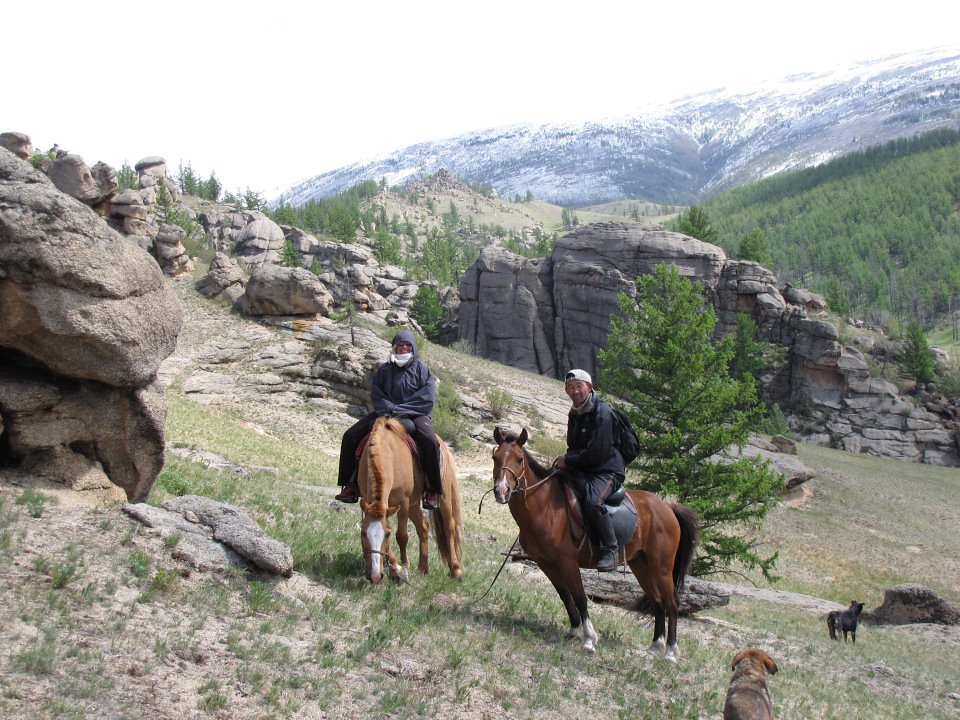 A horseback adventure covering many sites of central Mongolia; Karakorum, Erdene Zuu monastery, Tsenkher hot springs, Terkhiin Tsagaan Lake, Ugii Lake, Hustai national park and much more. Having maintained much of its centuries-old nomadic traditions, Mongolia is one of the only places on earth you can interact with true nomadic peoples, whilst riding traditional Mongolian horses.

Arrive at Ulaanbaatar. Meet your Guide at the airport and transfer to the hotel. We will star city tour the first stop is Sukhbaatar Square, the central square named after the revolutionary hero of 1921 Damdiny Sukhbaatar who declared independence from China. We visit Gandan Monastery the largest and most famous functioning monastery in Mongolia; here we may experience monks in worship and see the impressive Golden Buddha Statue of Migjid Janraisig. Time permitting Natural History Museum which is famous for its authentic dinosaur skeletons and and visit Zaisan memorial hill to view of whole city from there. Welcome dinner at restaurant and stay overnight in hotel. (B, L, D)

Early morning drive to Karakorum and arrive late afternoon, visit Erdene zuu moanstery and great monument of three dynasties. Ancient capital of Mongolia Karakorum city was located on the right bank of Orkhon River and on the north-eastern slopes of the Khangai Mountain and founded by Chinggis khan in 1220, was not only the capital of the vast Mongolian Empire but the epicentre of trade along the Silk Road. At that time the inhabitants of city were mostly Merchants craftsmen who came to karakorum from all over the world. Khubilai khan moved to the capital of the Mongolian Empire to China, establishing the Yuan Dynasty, began losing its importance. In 1379 much of the city was badly damaged during an attack by the army of the Min Dynasty. Stay overnight in ger at tourist camp. (B, L, D)

Erdene zuu monastery was built by Avtai Sain Khan on the ruin of the Mongolian capital Karakorum in 1586. It was the first great Buddhist Monastery of Mongolia. It is part of the World Heritage Site entitled Orkhon Valley Cultural Landscape. Stones from the ruins of Karakorum were used in construction. It is surrounded by a wall featuring 108 stupas, 108 being a sacred number in Buddhism, and the number of beads in a Buddhist rosary. The monastery was damaged by warfare in the 1680s, but was rebuilt in the 18th century and by 1872 had a full 62 temples inside. The Erdene Zuu Monastery was taken to state protection and became museum in 1944.

We will have breakfast at the tourist camp. This morning, we will meet our horse guides to start our horse tour to Orkhon Waterfall for next three days. We will stop for the lunch on the way and we will visit nomadic family to explore how to live in ger, their lifestyle, and hospitality. On theway, we will visit Tuwkhun monastery which is founded by Zanabazar. This attractive landscape is registered as WORLD HERITAGE PLACE from UNESCO. Water falls from a height of 20 meters at Orkhon Waterfall, which is locally known as Ulaan Tsutgalan. Stay overnight in tent. (B, L, D)

After breakfast, we will continue horse riding to Tsenkher hot spring for the next three days. We will camp in the nature. Stay overnight in tent (B, L, D)

We travel to Terkhiin Tsagaan National Park and Khorgo volcano. The lake, birdlife and mountains are now protected within the 77,267 hectare Khorgo-Terkhiin Tsagaan Nuur National Park. The lake, which was formed by lava flows from a volcanic eruption many millennia ago, is excellent for swimming, though a bit cold in the morning - try the late afternoon, after the sun has warmed it. There is a horse trip and trekking is available to Khorgo Volcano and trekking. Stay overnight in ger at tourist camp (B, L, D)

In the morning drive to Ugii Lake. On the way we will be visiting two monuments of Turkish and about 60 kilometers from the imperial town of Karakorin. There are two important monoliths located near another one. The first monument is dedicated to the Turkish prince Kul-Tegin (638-731), and the other to his brother Bilge-Khan (716-734). In the afternoon take some rest and short hiking by lakeshore. Stay overnight in ger at tourist camp. (B, L, D)

Drive back to Ulaanbaatar. Transfer to the hotel and lunch at the finest restaurant in Ulaanbaatar. In the afternoon free time do shopping for cashmere shop, souvenir shop and State Department Store. Enjoy watch national folklore performance by “Tumen Ekh” national song, throat singing, tsam mask dance and so on. A farewell dinner and stay overnight in hotel.

Transfer to the “Chinggis Khan” International Airport or Ulaanbaatar Train Station for departure.

We were delighted with our Mongolian experience. The ger camp was highlight and the traditional Mongolian concert was really enjoyable. Our overall experience was extremely positive.

Thank you for looking after us so well.