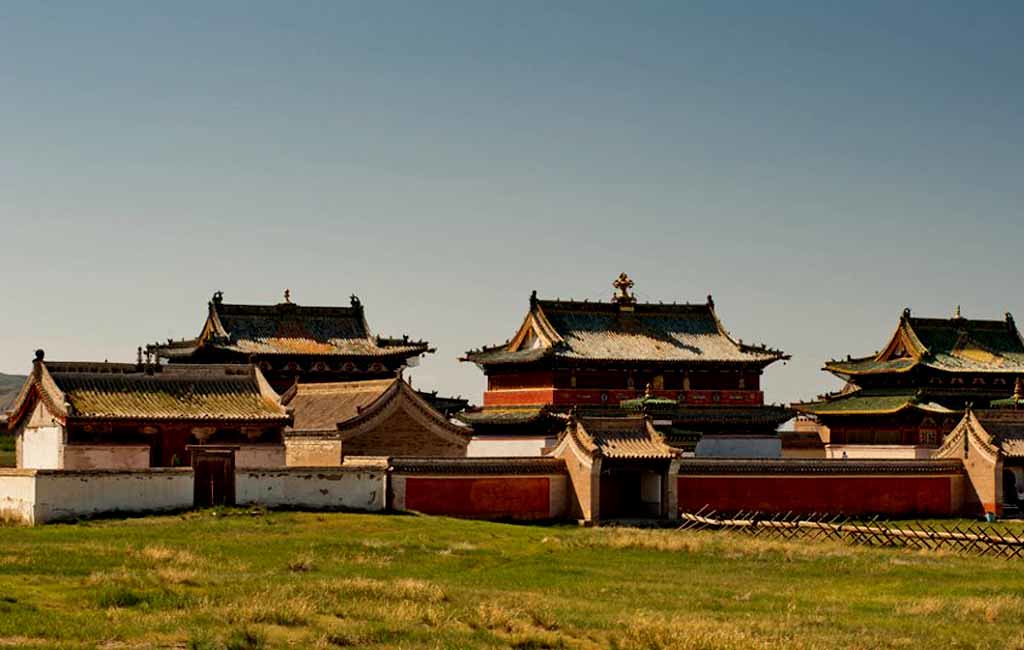 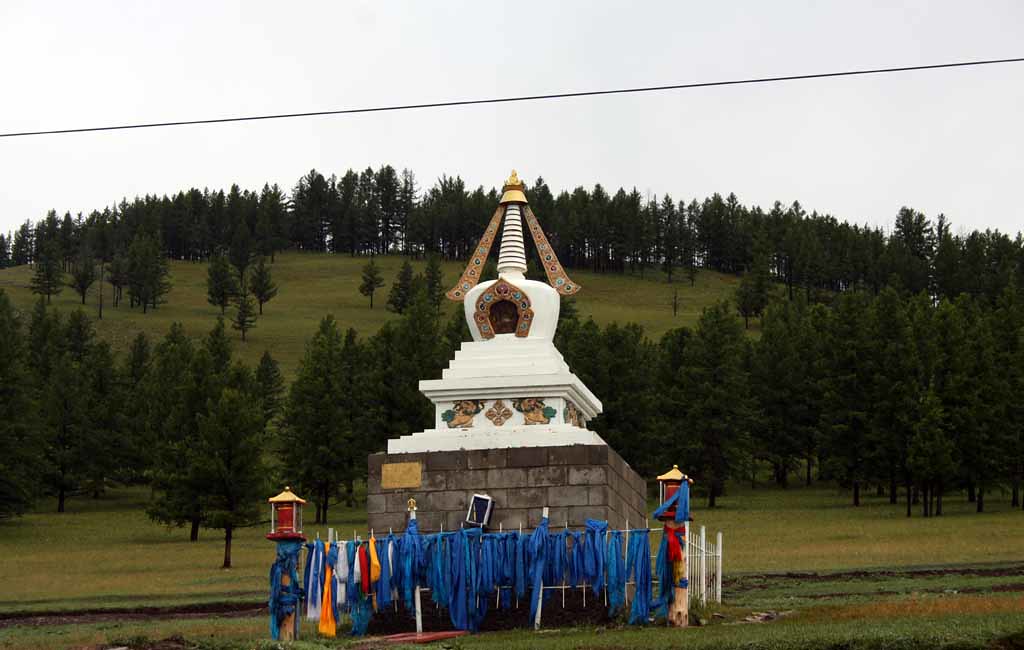 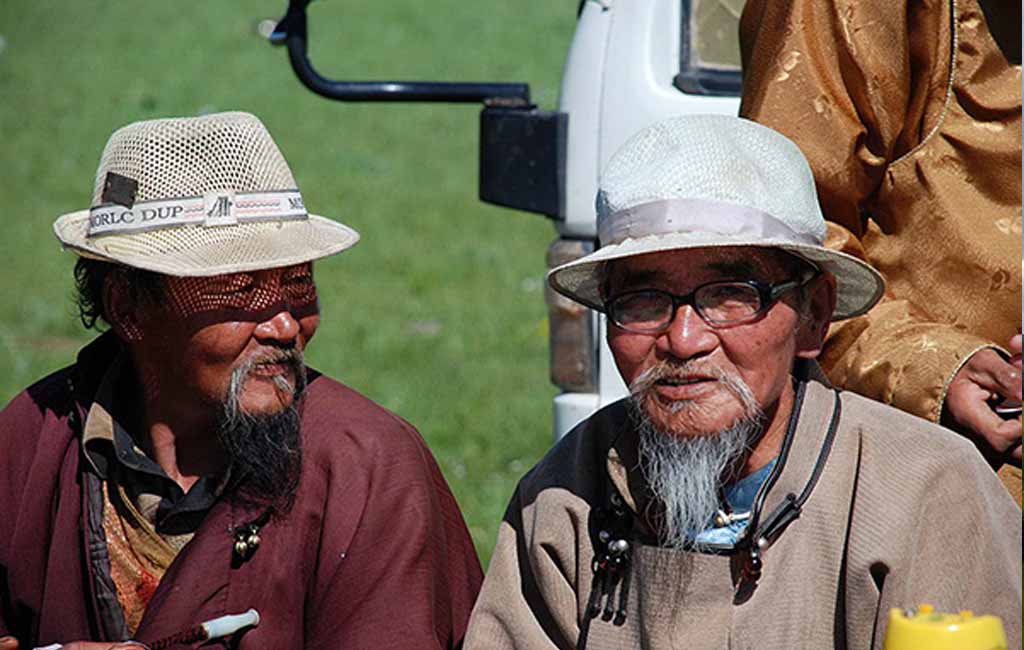 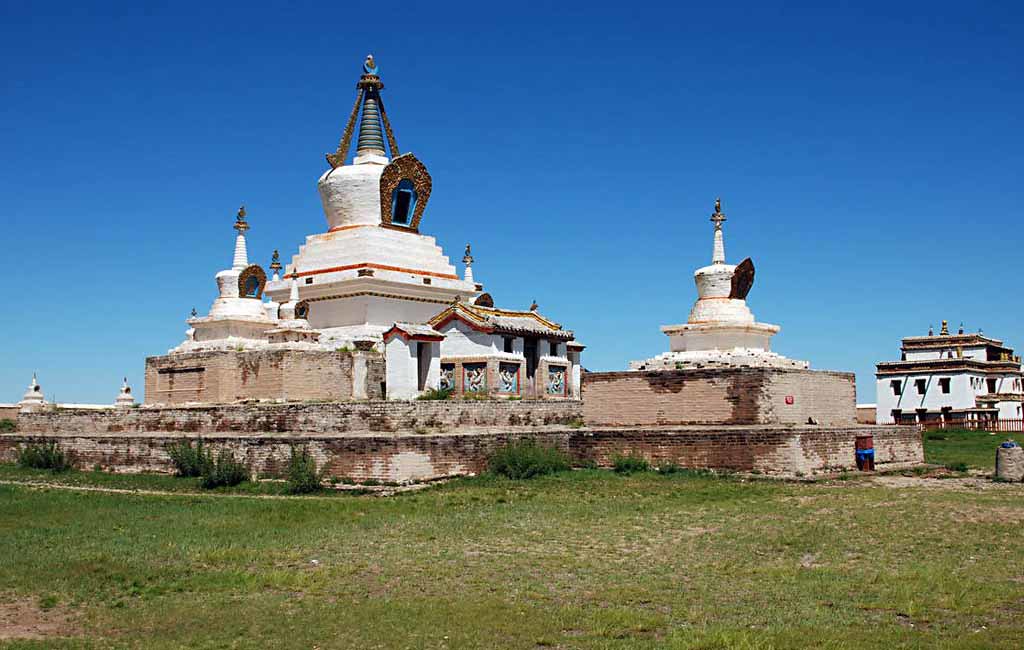 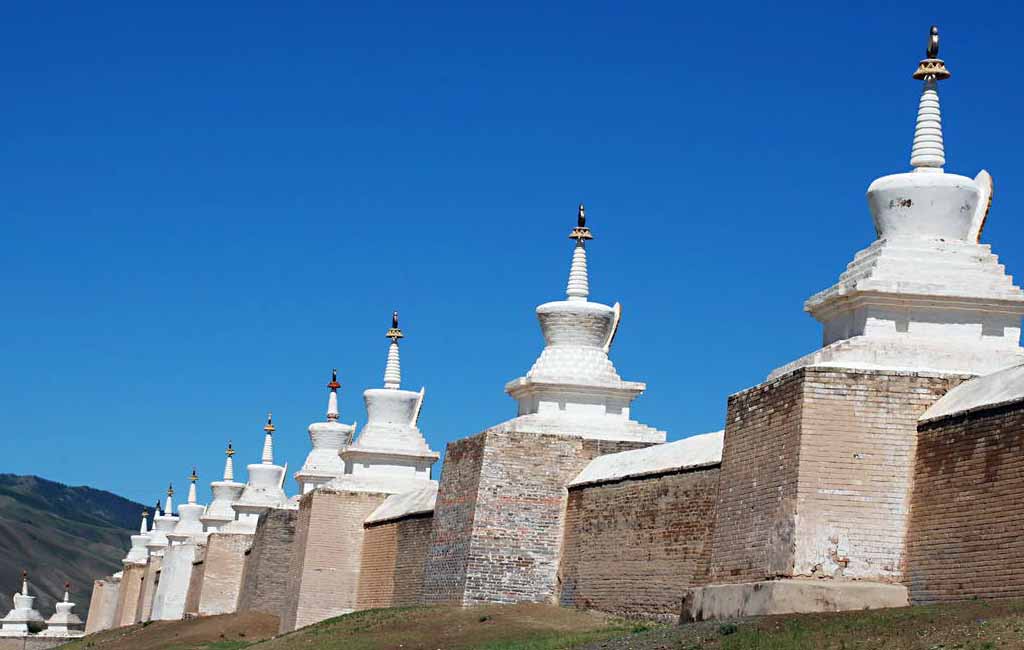 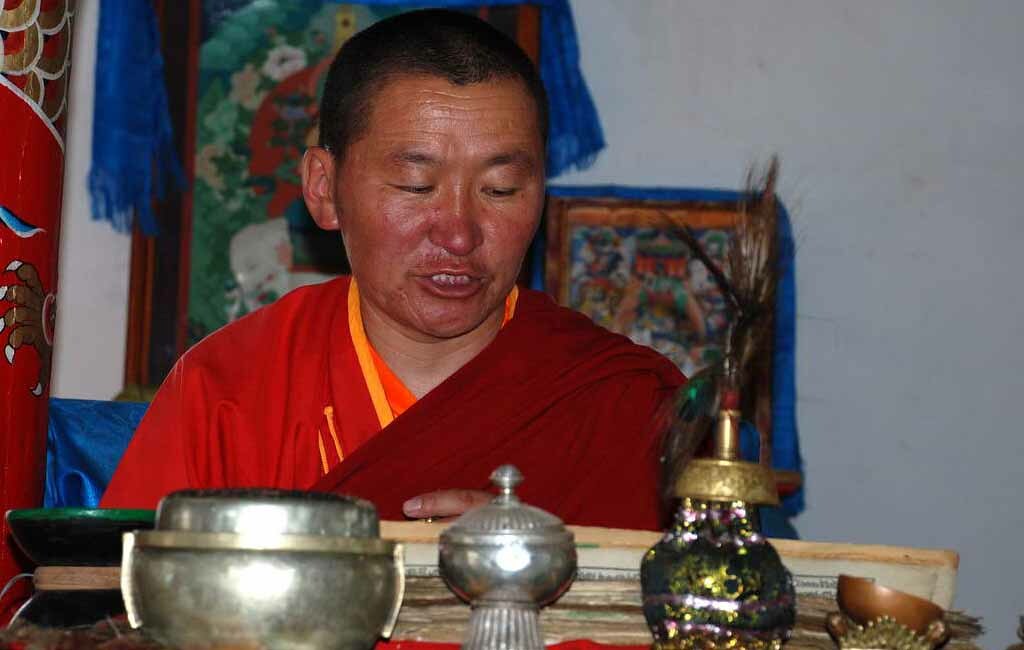 Region:
Central and Northern part of Mongolia.
Duration:
14 days / 13 nights
Available time:
Privately anytime May - October
Note:
You can arrange your own trip date (with best rate possible) as you request
Number of travelers:
Min - 2, Max - 18

Arrive at Ulaanbaatar. Meet your Guide at the airport and transfer to the hotel. We will star city tour the first stop is Sukhbaatar Square, the central square named after the revolutionary hero of 1921 Damdiny Sukhbaatar who declared independence from China. We visit Gandan Monastery the largest and most famous functioning monastery in Mongolia; here we may experience monks in worship and see the impressive Golden Buddha Statue of Migjid Janraisig. Time permitting Natural History Museum which is famous for its authentic dinosaur skeletons and and visit Zaisan memorial hill to view of whole city from there. Welcome dinner at restaurant and stay overnight in hotel. (B, L, D)

Early morning drive to Karakorum and arrive late afternoon, on the way picnic. Ancient capital of Mongolia Karakorum city was located on the right bank of Orkhon River and on the north-eastern slopes of the Khangai Mountain and founded by Chinggis khan in 1220, was not only the capital of the vast Mongolian Empire but the epicentre of trade along the Silk Road. At that time the inhabitants of city were mostly Merchants craftsmen who came to karakorum from all over the world. Khubilai khan moved to the capital of the Mongolian Empire to China, establishing the Yuan Dynasty, began losing its importance. In 1379 much of the city was badly damaged during an attack by the army of the Min Dynasty. Stay overnight in ger at tourist camp. (B, L, D)

Erdene zuu monastery was built by Avtai Sain Khan on the ruin of the Mongolian capital Karakorum in 1586. It was the first great Buddhist Monastery of Mongolia. It is part of the World Heritage Site entitled Orkhon Valley Cultural Landscape. Stones from the ruins of Karakorum were used in construction. It is surrounded by a wall featuring 108 stupas, 108 being a sacred number in Buddhism, and the number of beads in a Buddhist rosary. The monastery was damaged by warfare in the 1680s, but was rebuilt in the 18th century and by 1872 had a full 62 temples inside. The Erdene Zuu Monastery was taken to state protection and became museum in 1944.

Visit shankh monastery:Shankh is the oldest monastery in Mongolia, founded in 1647 by Zanabazar (1635-1723), a revered sculptor, politician, religious teacher, diplomat and living Buddha, who became Mongolia's first Bogd Khan (God King). Known as the West Monastery, it was one of the foremost seats of Buddhist teaching and practice in the country for almost three centuries. At its height, Shankh consisted of several schools specialized in Tantric rituals, particularly the Kalachakra, philosophy and astrology. It housed over 1,500 monks and served the religious, medical and educational needs of the region.

In the morning we will drive to Orkhon Waterfall. Water falls from a height of 20 meters at Orkhon Waterfall, which is locally known as Ulaan Tsutgalan. Have a lunch on the way then continue to drive to Tuwkhun monastery which is founded by Zanabazar. This attractive landscape is registered as WORLD HERITAGE PLACE from UNESCO. Stay overnight in ger at tourist camp. (B, L, D)

The creation work temple established by Undur Gegeen Zanabazar in 1654 dedicated to religious study and art works became the foundation of today’s Tuvkhun Monastery. It is located on a rocky mountain hill surrounded by forests elevated in 2300 meters above sea level. In 1651, the first religious statesman Zanabazar built a small stony building and he created Soyombo letters in the building. The monastery is located in natural rocky landscape where there is a small cave named “Mother’s abdomen”. The Mongols still protect this unique place as naming it as a “Country of Mahagal”. These monuments were created during the war between Khalkh and Uuld and the the Door of Great Pleasure is a tunnel dug through the mountain. During the war the Under Gegeen escaped through this tunnel and intentionally closed the hole by a big stone. The monastery was taken under the state protection in 1992.

Drive to Tsenkher hot spring pass Tuvkhun monastery which was founded by Zanabazar. Transfer to camp, enjoy bath hot spring at the area of resort. Stay overnight in ger at tourist camp. (B, L, D)

Early in the morning drive to Terkhiin tsagaan Lake. On the way we will make a short stop in Tsetserleg capital of Arkhangai visit Zaya Gegeenii huree museum and then continue drive to lake. On the way visit Taikhar Rock. Before dinner you transfer to the camp and stay overnight in ger at tourist camp. (B, L, D)

Early in the morning drive to Murun province through beautiful landscapes. Packed lunch on the way. Stay overnight in hotel. (B, L, D)

Drive to Khusgul Lake and transfer to the camp. In the afternoon you visit with yak breeding family. Stay overnight in ger at toursit camp. (B, L, D)

During whole lovely day, you have an opportunity to ride reindeer and observe them. Kayak trip on the lake. Khuvsgul Lake is reckoned among the purest fresh water lakes in the world. Khuvsgul Lake is the second deepest lake in Central Asia and contains 60% as much water as Lake Baikal. Depth of Khuvsgul Lake is 262 meters and 136 kilometers long. In the afternoon we will visit shaman people. Stay overnight in ger at the tourist camp. (B, L, D)

Today, we will make our way to travel Uran Togoo Volcano. We will have picnic in the nature. Stay overnight in ger at the tourist camp. (B, L, D)

After breakfast drive to Amarbayasgalant through the Erdene city which is the biggest city in Mongolia make a short stop there. Late in the afternoon visit with monastery that’s located in Selenge province, northwest of Mongolia, the biggest monastery in Mongolia after Erdene zuu monastery. Stay overnight in ger at the tourist camp. (B, L, D)

The monastery was established by order of Manju emperor Enkh- Amgalan Khan, to cherish and give respect to the Undur Geghen Zanabazar, his skills, wisdom, intellect and accomplishments. One hundred thousand langs (=3730 kg) of silver from the state fund were used to build a magnificently styled place for Buddha teaching and practice in honor of Zanabazar. After searching for a suitable place, the construction works of the monastery called “Amarbayasgalant ‘’, a palace for God `s meditation, began in the year of red horse, 1726, and was completed in the year of red dragon, 1736. Out of deep respect the monastery was then offered to the Undur Geghen.

Drive back to Ulaanbaatar, transfer to the hotel and do shopping including State department store and cashmere shops. Enjoy watch national folklore performance by “Tumen Ekh” national song, throat singing, tsam mask dance and so on. A farewell dinner and stay overnight in hotel. 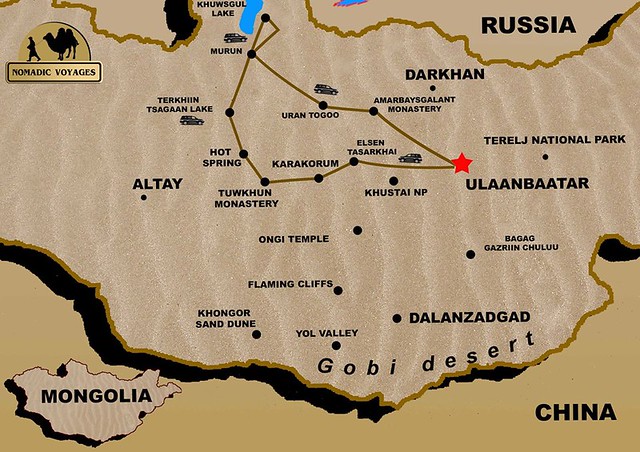 Hello Everybody,
I traveled with Nomadic Voyages in Mongolia in the summer of 2010. Mr. SoyolBayar, the owner and operator. He knows the landscape and the history behind the various locations that we toured as a group of six. Our tour guide understands his clients taste and is good at custom arranging tours according to the requests of the travelers in his entourage.

Our tour guide had everything well timed, and calling ahead he always had our arrival destination details ready and well prepared to accommodate us when we got to our location. The sights, the food, the reception, and the accommodations were excellent. His prices included everything; tickets to enter the shows, hotel accommodations, transport, food, and guided tours. I recommend Nomadic Voyages without reservation to anyone who wishes to visit Mongolia.

Mongolia is a beautiful country located in the Central Asian grasslands called the Steppes. It is a land-locked country, sandwiched between Russia and China. The wide open spaces and the friendliness of the people will leave you nostalgic for a land of extensive peacefulness and vastness, long after your visit. Mongolia is worth the visit, and Mongolian Journeys is your best bet at getting your money worth seeing this gorgeous land.