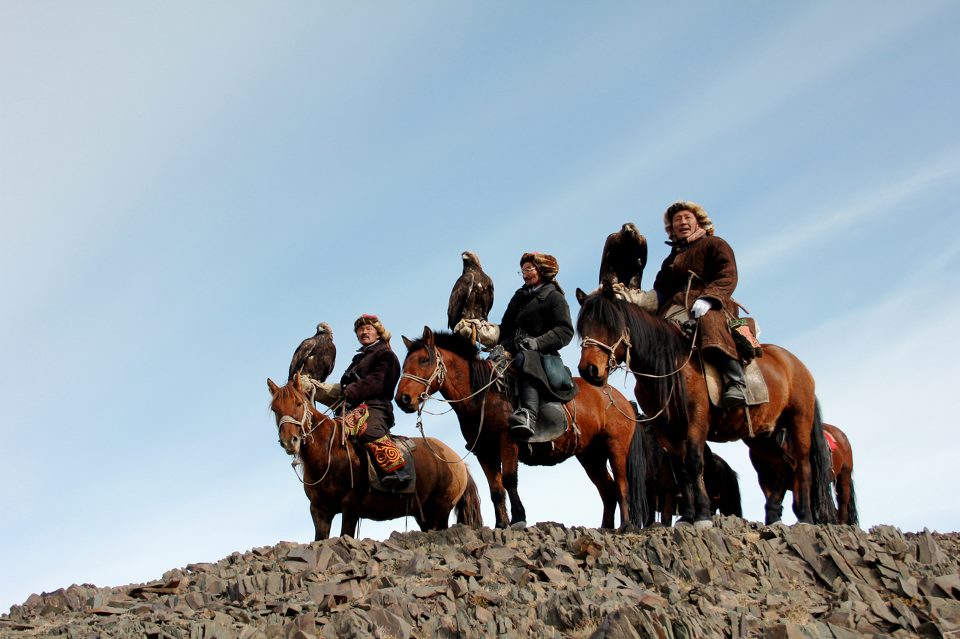 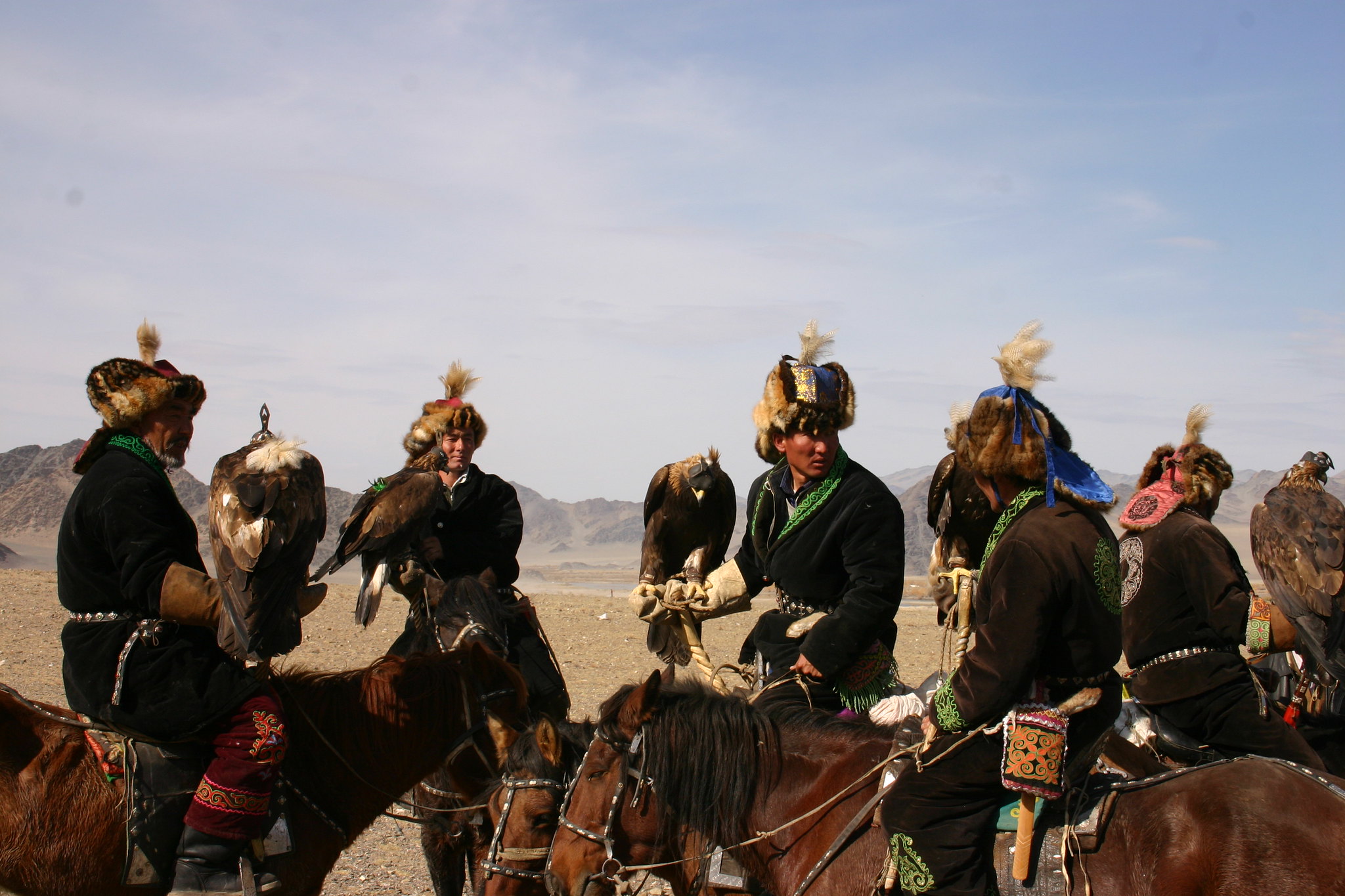 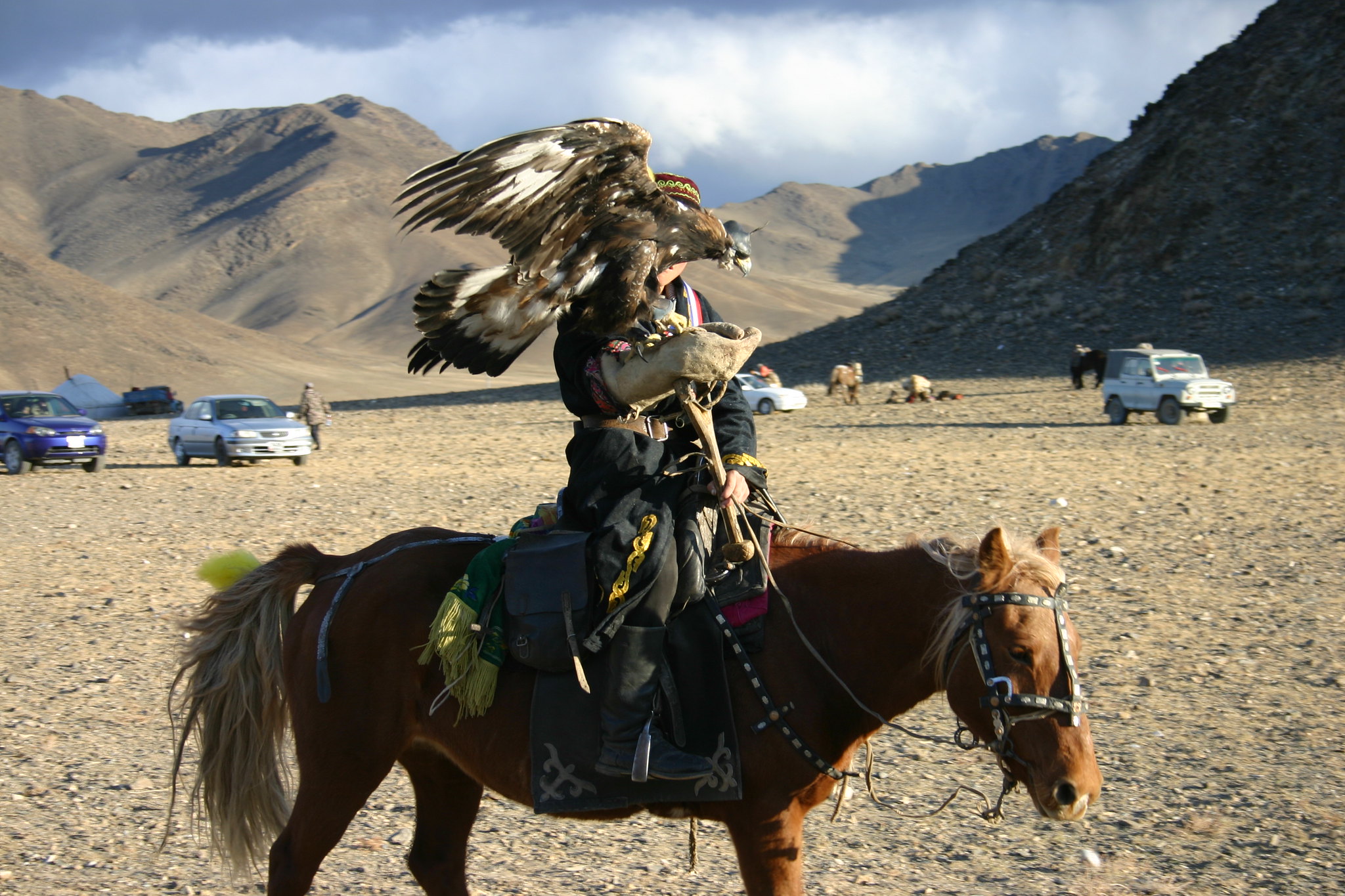 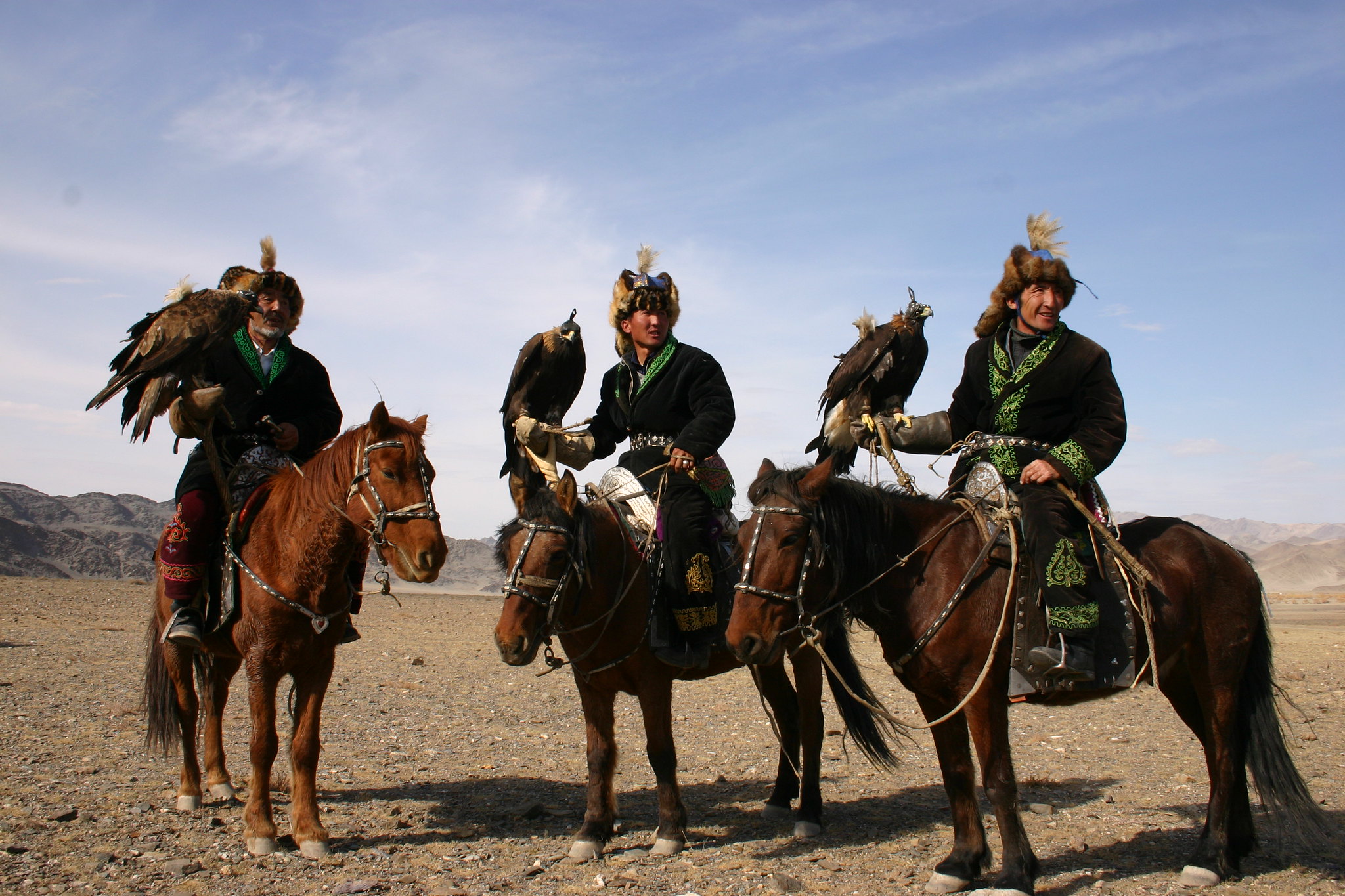 Price: $2299 for per person
Single supplement: $450
If you are traveling alone and wish to share accommodations, we will try to match you with a roommate.

Every year during the first week of October, the “Eagle festival” is celebrated in Bayan Ulgii, in the far west of Mongolia. The aimag of Bayan Ulgii is situated in the breathtaking scenery of the Altai mountain range, where four Asian countries meet. The inhabitants of this area with its rich mix of cultures are mostly ethnic Kazakhs wearing their traditional embroidered clothes.

The “Eagle festival” is a tournament of falconers from the region, who hunt with trained eagles. Once a year, they come together from their home village to measure their skills. There are about 380 falconers organized in an association. They are of all ages, from the teenage boy to the octogenarian, but in keeping with tradition, no girls or women may practice the art.

Upon arrival at Chinggis Khan International Airport, you are met by tour guide and transferred to the hotel in the city center.
We will star city tour the first stop is Sukhbaatar Square, the central square named after the revolutionary hero of 1921 Damdiny Sukhbaatar who declared independence from China. We visit Gandan Monastery the largest and most famous functioning monastery in Mongolia; here we may experience monks in worship and see the impressive Golden Buddha Statue of Migjid Janraisig. Time permitting Natural History Museum which is famous for its authentic dinosaur skeletons and and visit Zaisan memorial hill to view of whole city from there.

Transfer to the airport for a morning flight to Ulgii (3.5 hours), capital of Bayan- Ulgii, Mongolia’s westernmost province. Ninety percent of the population here is Kazakh, Mongolia’s largest ethnic minority. The isolation of the Altai Mountains has preserved the language and traditions of the Kazakhs, who live amongst some of the most spectacular scenery in Mongolia. We will visit Kazakh families in their settlement. Their Gers are slightly larger than Mongolian Gers, and are decorated with brightly colored rugs. We will enjoy their hospitality and friendliness and learn more in deep about their culture.

Ulgii (or Ölgii) is the capital of the Bayan-Ölgii Aimag (province) located in the extreme west of the country. It has an altitude of about 5,600 feet and population of about 29,000. It is the largest town in the area. It is the center of the predominately Kazakh region of Mongolia. The isolation of the Altai Mountains has preserved the language and traditions of the Kazakhs, who live amongst some of the most spectacular scenery in Mongolia. We will visit Kazakh families in their settlement. Their Gers are slightly larger than Mongolian Gers, and are decorated with brightly colored rugs. We will enjoy their hospitality and friendliness and learn more in deep about their culture. You will see their traditional technology to make colorful rug.
A visit to the well regarded provincial museum should provide a good overview of the Muslim culture of Western Mongolia that differs so much from most of Mongolia.

The official opening ceremony commences with the participants parading in on horseback with their eagles. The competition begins with each Kazakh displaying his hunting outfit and accessories, the most elaborate and beautiful of which receive the highest points. In the afternoon, the judges will evaluate the Golden Eagles’ speed and agility. The eagles will be released from a cliff with their owners standing below, signaling for the eagles to land upon their arms as they do while hunting. Those with the fastest times and best technique will be awarded the highest scores. In the evening, attend a Kazakh play in honor of the hunters and their eagles.

The Golden Eagles will be released from a cliff to attack fox skins that will be dragged by their owner on horseback. The eagles will be judged on their success of grabbing the "fox", their speed, and "gripping" technique. As the points for the competitions are being tallied, the Kazakhs will compete in their traditional game called "kukbar"- passing goat skin which tests one's horse riding skills, strength and agility. In the late afternoon, the winners of the festival will be announced at the awards ceremony. In the evening, enjoy a celebration dinner.

Oct 8 ~ Day 6 Fly back to Ulaanbaatar

After breakfast, we will transfer to airport for return flight to Ulaanbaatar. In the afternoon there is more to see here upon arrival if you are interested, such as a visit to the Bogd Khan Winter Palace Museum, a residence of Bodg Jabzan Damba Hutagt VIII whom was Mongolia's last theocrat. Or take a leisurely stroll through the town center. In the evening perhaps you can enjoy a farewell dinner and attend the local folklore dance shows.

Check out from hotel and transfer to Chinggis Khaan International airport or Ulaanbaatar train station for departure.

Price: $2299 for per person
Single supplement: $450
If you are traveling alone and wish to share accommodations, we will try to match you with a roommate. 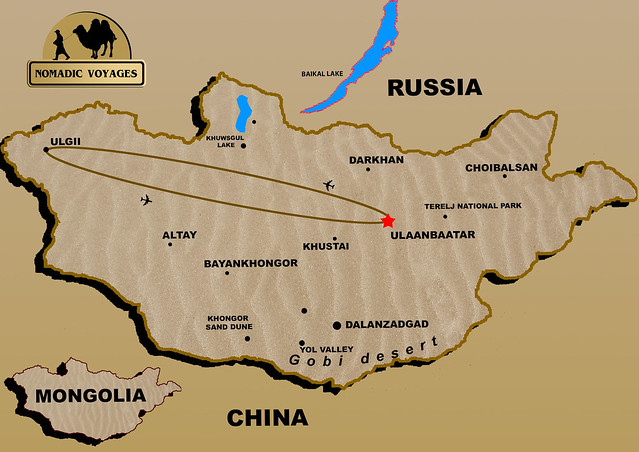 Just want to thank you for your wonderful hospitality and expert tour guiding during our trip to Mongolia. We loved visiting the Husai National Park and exploring the city of Ulaanbaatar. Our favorite part of the trip was seeing the beautiful countryside and encountering wild horses, camels and eagles. Thank you so much for showing us around and making sure our trip was a success. We also enjoyed our driver, Zoloo. Look forward to planning our next adventure with you.

The Trip: Mongolia and the Golden Eagle festival

THE TRIP Mongolia and the Golden Eagle Festival

Who could believe that anything could be so exciting and exhilarating? Our group of eight were in Mongolia, the 18th biggest country in the world, 300 kilometres from China on the Gobi Plains, a vast track of flat grey-green land alongside the Altai Mountains. We were on our way to see the towering Singing Sands of the Gobi Desert and the Flaming Cliffs where American Roy Chapman Andrews discovered the first dinosaur eggs in 1922. Dinosaur fossils of all types were piled on top of one another, giving credence to the Big Bang Theory that saw the dinosaurs' sudden demise. We later visited the Khavtsgait Petroglyphs, exquisite rock sketches of the local animals from the Bronze Age 4000BC-3000BC depicting bactrian (two-humped) camels, ibex, horses, goats, sheep, wolves, yaks, hunters with bows and arrows and hunting eagles

Suddenly, our guide accelerated across the plains. He had spotted a herd of rare black tail gazelles. We ran alongside a little animal. From 60km/h to 80km/h, and still it bounded ahead.

Our accommodation in the Gobi Nomad Lodge comprised roomy gers, round felt-lined tents with heating and private facilities (upon request), and all meals. The food was wholesome salads, and stews. We relished the silence and the stars at night.

We later flew to Ulgii for the Gold Eagle Festival, as seen in the documentary, The Eagle Huntress. More than a hundred traditional horsemen vied to display the best horsemanship, dress and, of course, the skill of their hunting eagles. The star of the movie, Aisholpan, now aged 16, appeared resplendent in white with her hunting eagle.

But not all went to plan. One eagle landed on the wrong horseman, another settled for a nearby barbecue, and Aisholpan had a white camel that sat down in the middle of the camel race and refused to budge.

Tour organiser Nomadic Voyages was without fault. Our guide and drivers were knowledgeable, kind and considerate. The Land Cruisers were new and comfortable. We had plenty of opportunities to visit museums to see the world of Genghis Khan and temples.

BEST BITS: The Golden Eagle Festival, and lunch with a local family, eating Russian caviar and mutton stew with a camel, an eagle, a wolf, several curious yaks and the odd red sheep.